There are more than a million known species of arthropods. There may actually be ten times that many. Arthropods include insects, spiders, lobsters, and centipedes. The arthropods pictured in Figure below give just a hint of the phylum’s diversity.

Arthropod Diversity. Dust mites are among the smallest of arthropods. Japanese spider crabs are the largest. Besides size, what other differences among arthropods do you see in these photos?

Structure and Function of Arthropods

Arthropods range in length from about 1 millimeter to 4 meters (about 13 feet). They have a segmented body with a hard exoskeleton. They also have jointed appendages. The body segments are the head, thorax, and abdomen (see Figure below). In some arthropods, the head and thorax are joined together as a cephalothorax.

Arthropod Body Plan. The honeybee shows the general body plan of an arthropod.

The arthropod exoskeleton consists of several layers of cuticle. The exoskeleton prevents water loss and gives support and protection. It also acts as a counterforce for the contraction of muscles. The exoskeleton doesn’t grow as the animal grows. Therefore, it must be shed and replaced with a new one periodically through life. This is called molting.

Watch the video below to see a cicada molting:

The jointed appendages of arthropods may be used as legs for walking. Being jointed makes them more flexible. Try walking or climbing stairs without bending your knees, and you’ll see why joints are helpful. In most arthropods, the appendages on the head have been modified for other functions. Figure below shows some of head appendages found in arthropods. Sensory organs such as eyes are also found on the head.

Arthropod Head. Arthropods have evolved a variety of specialized appendages and other structures on their head.

In the ponds of northern Europe lives a tiny brown spider that spends its entire life underwater. But just like land spiders, it needs oxygen to breathe. So, how does this spider breath? Does it use book lungs? No. In fact, aquatic spiders, known asdiving bell spiders, have gills, and every so often, the spider leaves its underwater web to visit the surface and bring back a bubble of air that sticks to its hairy abdomen. It deposits the bubble into a little silk air tank. This diving bell is a gill that sucks oxygen from the water, allowing the spider to stay underwater for up to 24 hours. See http://news.sciencemag.org/sciencenow/2011/06/spiders.html?ref=hp for additional information and additional pictures.

Incredible: This Underwater Spider Has an Actual Scuba Tank 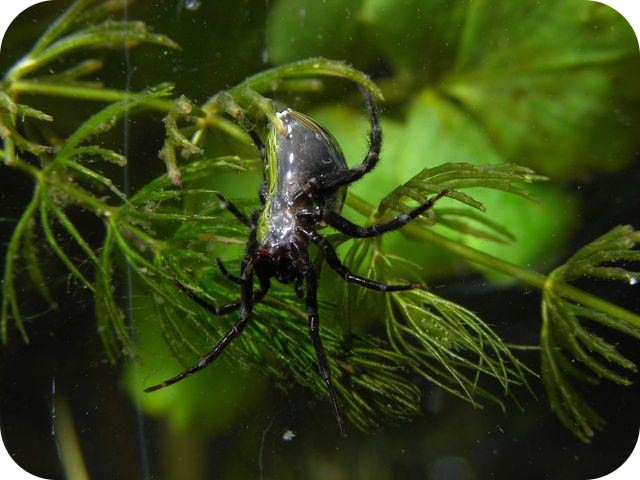 Arthropods have a life cycle with sexual reproduction. Most species go through larval stages after hatching. The larvae are very different from the adults. They change into the adult form in a process called metamorphosis. This may take place within a cocoon. A familiar example of metamorphosis is the transformation of a caterpillar (larva) into a butterfly (adult). Other arthropod species, in contrast, hatch young that look like small adults. These species lack both larval stages and metamorphosis.

Trilobites are an extinct marine arthropod. You can see one in the fossil pictured below.

Most members of the subphylum Hexapoda are insects (class Insecta). In fact, more than half of all known organisms are insects. There may be more than 10 million insect species in the world, most of them yet to be identified. It’s clear that insects, and not humans, dominate life on Earth.

Structure and Function of Insects

Insects range in length from less than a millimeter to about the length of your arm. They can be found in most habitats, but they are mainly terrestrial. Many can fly, so they are also aerial. Like other arthropods, insects have a head, thorax, and abdomen. They have a wide variety of appendages, including six legs attached to the thorax. Insects have a pair of antennae for “smelling” and “tasting” chemicals. Some insects can also use their antennae to detect sound. Other sensory organs on the head include several simple eyes and a pair of compound eyes. The compound eyes let insects see images. Butterflies and bees can even see in color. For feeding, the head contains one pair of mandibles and two pairs of maxillae. Insects consume a wide range of foods, and their mouthparts have become specialized. Several variations are shown in Figure below.

Mouthpart Specialization in Insects. The mouthparts of insects are created for different food sources.

An insect’s abdomen contains most of the internal organs. Like other arthropods, insects have a complete digestive system. They also have an open circulatory system and central nervous system. Like other terrestrial arthropods, they have trachea for breathing air and Malphigian tubules for excretion.

Insects are the only invertebrates that can fly. Flight has important advantages. It’s a guaranteed means of escape from nonflying predators. It also aids in the search for food and mates. Insects generally have two pairs of wings for flight. Wings are part of the exoskeleton and attached to the thorax. Insect wings show a lot of variation. As you can see in Figure below, butterfly wings are paper-thin, whereas beetle wings are like armor. Not all insect wings work the same way, either. They differ in how the muscles are attached and whether the two pairs of wings work independently or together. Besides flight, wings serve other functions. They may protect the body (beetles), communicate visually with other insects (butterflies), or produce sounds to attract mates (katydids).

Form and Function in Insect Wings. Beetles, butterflies, and katydids all have two pairs of wings that they use for flight. However, the wings are very different because they have other functions as well.

Nearly all insects reproduce sexually. Some can also reproduce asexually. An example of an insect life cycle is shown in Figure below.

Insect Life Cycle. This diagram represents the life cycle of a fly. Most insects have a similar life cycle.

When an insect egg hatches, a larva emerges. The larva eats and grows and then enters the pupa stage. The pupa is immobile and may be encased in a cocoon. During the pupa stage, the insect goes through metamorphosis. Tissues and appendages of the larva break down and reorganize into the adult form. Metamorphosis is actually very advantageous. It allows functions to be divided between life stages.

Insects are capable of a surprising range of behaviors. Most of their behaviors, such as flying and mating, are instinctive. These are behaviors that don’t need to be learned. They are largely controlled by genes. However, some insect behaviors are learned. For example, ants and bees can learn where food is located and keep going back for more.

Many species of insects have complex social behaviors. They live together in large, organized colonies (see Figure below). This is true of ants, termites, bees, and wasps. Colonies may include millions of individual insects. Colony members divide up the labor of the colony. Different insects are specialized for different jobs. Some reproduce, while others care for the young. Still others get food or defend the nest.

Termite Nest. This cathedral-like structure is the nest of a huge colony of termites in Australia. In fact, it is the world’s largest known termite nest. It towers 7.5 meters (25 feet) above the ground and houses millions of termites.

Living in a large colony requires good communication. Ants communicate with chemicals called pheromones. For example, an ant deposits pheromones on the ground as it returns to the nest from a food source. It is marking the path so other ants can find the food. Honeybees communicate by doing a “waggle dance.”

Most of us think ants are just pests. But not Brian Fisher. Known as “The Ant Guy,” he’s on a mission to show the world just how important and amazing these little creatures are and in the process, catalog all of the world’s 30,000 ant species before they become casualties of habitat loss. See http://www.kqed.org/quest/television/ants-the-invisible-majority2 for more information.

KQED: Landbugs: A Population of Millions

Ladybugs, also known as ladybird beetles, have a life cycle of four to six weeks. In one year as many as six generations of ladybird beetles may hatch. In the spring, each adult female lays up to 300 eggs in small clusters on plants where aphids are present. After a week the wingless larvae hatch. Both the ladybird beetle larvae and adults are active predators, eating only aphids, scales, mites and other plant-eating insects. The ladybugs live on the vegetation where their prey is found, which includes roses, oleander, milkweed and broccoli. Adult ladybugs don’t taste very good. A bird careless enough to try to eat one will not swallow it.

By late May to early June, when the larvae have depleted the food supply, the adults migrate to the mountains. There, they eat mainly pollen. The ladybugs gain fat from eating the pollen and this tides them over their nine-month hibernation. Thousands of adults hibernate overwinter in tight clusters, called aggregates, under fallen leaves and ground litter near streams. In the clear, warmer days of early spring, the ladybugs break up the aggregates and begin several days of mating. Learn about ladybugs at http://www.kqed.org/quest/television/ladybug-pajama-party.

Most humans interact with insects every day. Many of these interactions are harmless and often go unnoticed. However, insects cause humans a lot of harm. They spread human diseases. For example, the deadly bubonic plague of the middle ages was spread by fleas. Today, millions of people die each year from malaria, which is spread by mosquitoes. Insects also eat our crops. Sometimes they travel in huge swarms that completely strip the land of all plant material (see Figure below). On the other hand, we depend on insects for the very food we eat. Without insects to pollinate them, flowering plants—including many food crops—could not reproduce.

Locust Swarm. A swarm of locusts in the African country of Mauritania darkens the mid-day sky. The hungry insects will eat virtually all the plants in their path. Can you imagine them all flying into your hair and bumping into you…imagine that next time you go to sleep. 😉

A video that shows a locust swarm:

Honeybees are one of the most well-known insects on the planet. Bees are naturalized on every continent except Antarctica. Honeybees have a highly developed social structure and depend on their community, or colony, for survival, with a colony containing up to 20,000 bees. When bees search plants for nectar, pollen sticks to the fuzzy hairs that cover their hind legs. At the next flower, some of the pollen rubs off and fertilizes that flower. In this way, bees help improve fruit production.

Bees pollinate an estimated 130 different varieties of fruit, flowers, nuts and vegetables in the United States alone. Farmers obviously depend on bees to pollinate crops, such as fruit and nuts, but in recent years thousands of bee colonies have disappeared. This could be a devastating issue for farmers. Can anything be done? Meet two Northern California researchers looking for ways to make sure we always have bees to pollinate our crops at http://www.kqed.org/quest/television/better-bees-super-bee-and-wild-bee.

Click on the link below for the interactive “What type of arthropod?” activity:

1. Identify distinguishing traits of most arthropods.

2. What is molting? Why does it occur?

7. Give examples of insect behavior.

8. Assume you see a “bug” crawling over the ground. It has two body segments and lacks antennae. Which arthropod subphylum does the “bug” belong to? Explain your answer.

9. Present facts and a logical argument to support the following statement: Insects dominate life on Earth.

10. Relate form to function in the mouthparts of insects.

11. Explain why distinctive life stages and metamorphosis are helpful.

Previous: Mollusks and Annelids
Next: Echinoderms and Invertebrate Chordates