If you look at your hand, what do you see? Um, your hand? NOT the answer I’m looking for. SKIN! There we go. You see skin, which consists of cells. But what are skin cells made of? Like all living cells, they are made of matter. In fact, all things are made of matter. Matter is anything that takes up space and has mass (the quantity of matter in an object). Matter, in turn, is made up of chemical substances. In this lesson you will learn about the chemical substances that make up living things.

An element is a pure substance. It cannot be broken down into other types of substances. Each element is made up of just one type of atom. An atom is the smallest particle of an element that still has the properties of that element.

There are almost 120 known elements. As you can see from Figure below, the majority of elements are metals. Examples of metals are iron (Fe) and copper (Cu). Metals are shiny and good conductors of electricity and heat. Nonmetal elements are far fewer in number. They include hydrogen (H) and oxygen (O). They lack the properties of metals. 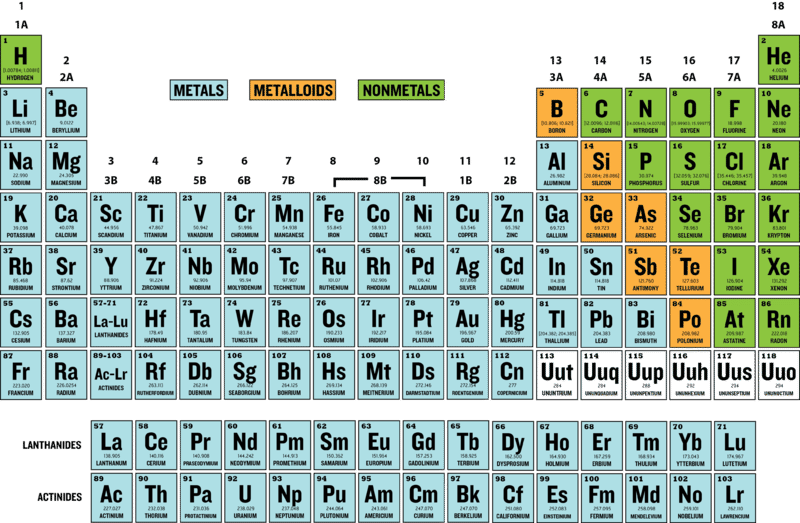 Periodic Table of the Elements. The periodic table of the elements arranges elements in groups based on their properties. The element most important to life is carbon (C). Find carbon in the table. What type of element is it, metal or nonmetal?

A compound is a substance that consists of two or more elements. A compound has a unique composition that is always the same. The smallest particle of a compound is called a molecule. Consider water as an example. A molecule of water always contains one atom of oxygen and two atoms of hydrogen. The composition of water is expressed by the chemical formula H2O. A model of a water molecule is shown in Figure below.

Water Molecule. A water molecule always has this composition, one atom of oxygen and two atoms of hydrogen.

The Significance of Carbon

A compound found mainly in living things is known as an organic compound. Organic compounds make up the cells and other structures of organisms and carry out life processes. Carbon is the main element in organic compounds, so carbon is essential to life on Earth. Without carbon, life as we know it could not exist. Why is carbon so basic to life? The reason is carbon’s ability to form stable bonds with many elements, including itself. This property allows carbon to form a huge variety of very large and complex molecules. In fact, there are nearly 10 million carbon-based compounds in living things! However, the millions of organic compounds can be grouped into just four major types: carbohydrates, lipids, proteins, and nucleic acids. You can compare the four types below. Each type is also described below.

It may look like waste, but to some people, it’s green power.

Note: There is a brief mention of evolution towards the end (why humans love sugar).

TEDEd: How do Carbohydrates impact your health?

A monosaccharide (mon-oe-sack-uh-ride) is a simple sugar such as fructose or glucose. Fructose is found in fruits, whereas glucose generally results from the digestion of other carbohydrates. Glucose is used for energy by the cells of most organisms.

KQED: Biofuels: From Sugar to Energy

For years there’s been buzz – both positive and negative – about generating ethanol fuel from corn. But thanks to recent developments, the Bay Area of California is rapidly becoming a world center for the next generation of green fuel alternatives. The Joint BioEnergy Institute is developing methods to isolate biofeuls from the sugars in cellulose. Watch the video Biofuels: Beyond Ethanol below for further information. Note: This video says the scientists are using evolution by forcing mutations.

Lipids may consist of fatty acids alone, or they may contain other molecules as well. For example, some lipids contain alcohol or phosphate groups. They include

Now, go make some food and tell your mom it’s for science.

When amino acids bind together, they form a long chain called a polypeptide. A protein consists of one or more polypeptide chains. A protein may have up to four levels of structure. The lowest level, a protein’s primary structure, is its sequence of amino acids. Higher levels of protein structure are described in Figure below. The complex structures of different proteins give them unique properties, which they need to carry out their various jobs in living organisms. You can learn more about protein structure by watching the animation at the link below. http://www.stolaf.edu/people/giannini/flashanimat/proteins/protein%20structure.swf

Proteins play many important roles in living things. Some proteins help cells keep their shape, and some make up muscle tissues. Many proteins speed up chemical reactions in cells. Other proteins are antibodies, which bind to foreign substances such as bacteria and target them for destruction. Still other proteins carry messages or materials. For example, human red blood cells contain a protein called hemoglobin, which binds with oxygen. Hemoglobin allows the blood to carry oxygen from the lungs to cells throughout the body. A model of the hemoglobin molecule is shown in Figure below.

Hemoglobin Molecule. This model represents the protein hemoglobin. The red parts of the molecule contain iron. The iron binds with oxygen molecules.

A short video describing protein function can be viewed at http://www.youtube.com/watch?v=T500B5yTy58 (4:02).

Here’s a video that explains nucleic acids (there is a brief mention of evolution):

If it’s O.K. with your parent, you can try out a game where you learn about and design RNA molecules. The web address is:

Make sure your parent knows there is a chat box on the site. The chat box is not accessible to type in, unless you log in. You don’t need to log in to play the first several levels.

If you look at Figure below, you will see that the sugar of one nucleotide binds to the phosphate group of the next nucleotide. These two molecules alternate to form the backbone of the nucleotide chain. The nitrogen bases in a nucleic acid stick out from the backbone. There are four different types of bases: cytosine, adenine, guanine, and either thymine (in DNA) or uracil (in RNA). In DNA, bonds form between bases on the two nucleotide chains and hold the chains together. Each type of base binds with just one other type of base: cytosine always binds with guanine, and adenine always binds with thymine. These pairs of bases are called complementary base pairs.

Here’s a trick to help you remember which bases pair together: The Cool Guys stick together! (cytosine and guanine) That leaves adenine and thymine and their first letters spell the word AT.

The binding of complementary bases allows DNA molecules to take their well-known shape, called a double helix, which is shown in Figure below. A double helix is like a spiral staircase. The double helix shape forms naturally and is very strong, making the two polynucleotide chains difficult to break apart. The structure of DNA will be further discussed in the chapter Molecular Genetics: From DNA to Proteins.

DNA Molecule. Bonds between complementary bases help form the double helix of a DNA molecule. The letters A, T, G, and C stand for the bases adenine, thymine, guanine, and cytosine. The sequence of these four bases in DNA is a code that carries instructions for making proteins. The start and stop codons are shown; these will be discussed in the Molecular Genetics: From DNA to Proteins chapter.

An animation of DNA structure can be viewed at http://www.youtube.com/watch?v=qy8dk5iS1f0.

1. What are elements and compounds? Give an example of each.

3. What determines the primary structure of a protein?

5. Identify the three parts of a nucleotide.

6. Butter is a fat that is a solid at room temperature. What type of fatty acids does butter contain? How do you know?

7. Assume that you are trying to identify an unknown organic molecule. It contains only carbon, hydrogen, and oxygen and is found in the cell walls of a newly discovered plant species. What type of organic compound is it?

8. Explain why carbon is essential to all known life on Earth.

9. Compare and contrast the structures and functions of simple sugars and complex carbohydrates.

10. Explain why molecules of saturated and unsaturated fatty acids have different shapes.

Large organic compounds consist of many smaller units that are linked together in chains.

Previous: Biology the Study of Life

2 thoughts on “2.1 Matter and Organic Compounds”