Autosomal traits are controlled by genes on one of the 22 human autosomes. Consider earlobe attachment. A single autosomal gene with two alleles determines whether you have attached earlobes or free-hanging earlobes. The allele for free-hanging earlobes (F) is dominant to the allele for attached earlobes (f). Other single-gene autosomal traits include widow’s peak and hitchhiker’s thumb. The dominant and recessive forms of these traits are shown in Figure below. Which form of these traits do you have? What are your possible genotypes for the traits? The chart in Figure below is called a pedigree. It shows how the earlobe trait was passed from generation to generation within a family. Pedigrees are useful tools for studying inheritance patterns.

You can watch a video explaining how pedigrees are used and what they reveal at this link: http://www.youtube.com/watch?v=HbIHjsn5cHo.

Having free-hanging earlobes is an autosomal dominant trait. This figure shows the trait and how it was inherited in a family over three generations. Shading indicates people who have the recessive form of the trait. Look at (or feel) your own earlobes. Which form of the trait do you have? Can you tell which genotype you have?

Other single-gene autosomal traits include widow’s peak and hitchhiker’s thumb. The dominant and recessive forms of these traits are shown in Figure below. Which form of these traits do you have? What are your possible genotypes for the traits?

Traits controlled by genes on the sex chromosomes are called sex-linked traits, or X-linked traits in the case of the X chromosome. Single-gene X-linked traits have a different pattern of inheritance than single-gene autosomal traits. Do you know why? It’s because males have just one X chromosome. In addition, they always inherit their X chromosome from their mother, and they pass it on to all their daughters but none of their sons. This is illustrated in Figure below.

Pedigree for Color Blindness. Color blindness is an X-linked recessive trait. Mothers pass the recessive allele for the trait to their sons, who pass it to their daughters.

Most human traits have more complex modes of inheritance than simple Mendelian inheritance. For example, the traits may be controlled by multiple alleles or multiple genes.

The majority of human genes are thought to have more than two alleles. Traits controlled by a single gene with more than two alleles are called multiple allele traits. An example is ABO blood type. There are three common alleles for this trait, which can be represented by the letters A, B, and O. As shown in Table below, there are six possible ABO genotypes but only four phenotypes. This is because alleles A and B are codominant to each other and both are dominant to O.

Blood Types: ABO and Rh (with donuts and sprinkles):

Can we take a break for a second and get some donuts? That was just cruel to have to watch that video and not have a box of donuts sitting on the counter.

Many human traits are controlled by more than one gene. These traits are called polygenic traits (or characteristics). The alleles of each gene have a minor additive effect on the phenotype. There are many possible combinations of alleles, especially if each gene has multiple alleles. Therefore, a whole continuum of phenotypes is possible. An example of a human polygenic trait is adult height. Several genes, each with more than one allele, contribute to this trait, so there are many possible adult heights. For example, one adult’s height might be 1.655 m (5.430 feet), and another adult’s height might be 1.656 m (5.433 feet) tall. Adult height ranges from less than 5 feet to more than 6 feet, but the majority of people fall near the middle of the range, as shown in Figure below.

Human Adult Height. Like many other polygenic traits, adult height has a bell-shaped distribution.

Many polygenic traits are affected by the environment. For example, adult height might be negatively impacted by poor diet or illness during childhood. Skin color is another polygenic trait. There is a wide range of skin colors in people worldwide. In addition to differences in skin color genes, differences in exposure to UV light explain most of the variation. As shown in Figure below, exposure to UV light darkens the skin.

Sometimes a single gene may affect more than one trait. This is called pleiotropy. An example is the gene that codes for the main protein in collagen, a substance that helps form bones. The gene for this protein also affects the ears and eyes. This was discovered from mutations in the gene. They result in problems not only in bones but also in these sensory organs.

In other cases, one gene affects the expression of another gene. This is called epistasis. Epistasis is similar to dominance, except that it occurs between different genes rather than between different alleles for the same gene. An example is the gene coding for widow’s peak. A gene that codes for baldness would “hide” the widow’s peak trait if it occurred in the same person.

You can click on any human chromosome at this link to see the genetic disorders associated with it:

Few genetic disorders are controlled by dominant alleles. A mutant dominant allele is expressed in every individual who inherits even one copy of it. If it causes a serious disorder, affected people may die young and fail to reproduce. Therefore, the mutant dominant allele is likely to die out of the population. A mutant recessive allele, such as the allele that causes sickle cell anemia (see Figure below and the link that follows), is not expressed in people who inherit just one copy of it. These people are called carriers. They do not have the disorder themselves, but they carry the mutant allele and can pass it to their offspring. Thus, the allele is likely to pass on to the next generation rather than die out. 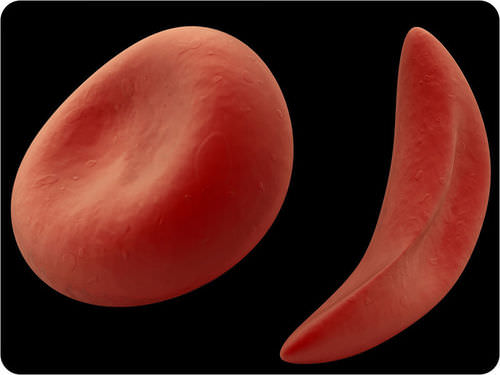 Sickle-Shaped and Normal Red Blood Cells. Sickle cell anemia is an autosomal recessive disorder. The mutation that causes the disorder affects just one amino acid in a single protein, but it has serious consequences for the affected person. This photo shows the sickle shape of red blood cells in people with sickle cell anemia.

Cystic Fibrosis and Tay-Sachs disease are two additional severe genetic disorders. They are discussed in the following video: http://www.youtube.com/watch?v=8s4he3wLgkM&feature=related (9:31).

Cystic Fibrosis “A Day in the Life”

Mistakes may occur during meiosis that result in nondisjunction. This is the failure of replicated chromosomes to separate during meiosis (the animation at the link below shows how this happens). Some of the resulting gametes will be missing a chromosome, while others will have an extra copy of the chromosome. If such gametes are fertilized and form zygotes, they usually do not survive. If they do survive, the individuals are likely to have serious genetic disorders. Table below lists several genetic disorders that are caused by abnormal numbers of chromosomes. Most chromosomal disorders involve the X chromosome. Look back at the X and Y chromosomes and you will see why. The X and Y chromosomes are very different in size, so nondisjunction of the sex chromosomes occurs relatively often.

A genetic condition where someone has either too many or two few chromosomes is called aneuploidy: https://learn.genetics.utah.edu/content/disorders/extraormissing/ 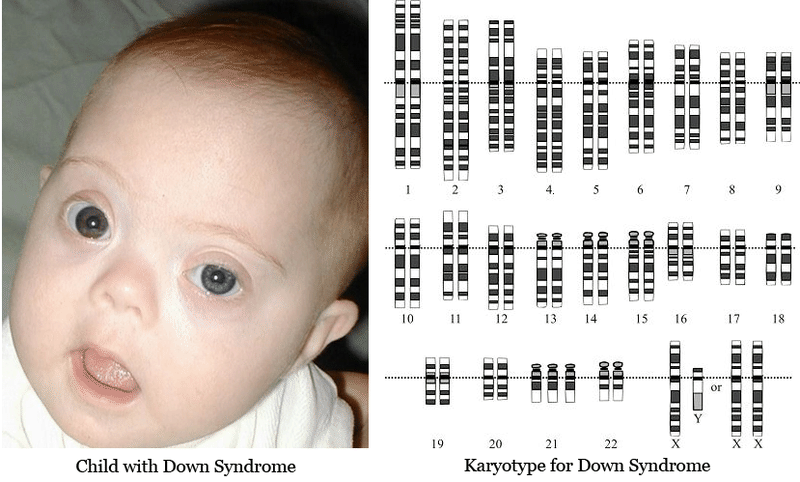 Trisomy 21 (Down Syndrome) Karyotype. A karyotype is a picture of a cell’s chromosomes. Note the extra chromosome 21. Child with Down syndrome, exhibiting characteristic facial appearance.

You may wish to do a search on YouTube for Born This Way episodes.

Click the link below for an interactive karyotype activity:

A genetic disorder that is caused by a mutation can be inherited. Therefore, people with a genetic disorder in their family may be concerned about having children with the disorder. Professionals known as genetic counselors can help them understand the risks of their children being affected. If they decide to have children, they may be advised to have prenatal (“before birth”) testing to see if the fetus has any genetic abnormalities. One method of prenatal testing is amniocentesis. In this procedure, a few fetal cells are extracted from the fluid surrounding the fetus, and the fetal chromosomes are examined.

The symptoms of genetic disorders can sometimes be treated, but cures for genetic disorders are still in the early stages of development. One potential cure that has already been used with some success is gene therapy. This involves inserting normal genes into cells with mutant genes. At the following link, you can watch the video Sickle Cell Anemia: Hope from Gene Therapy, to learn how scientists are trying to cure sickle-cell anemia with gene therapy.

If you could learn your risk of getting cancer or another genetic disease, would you? Though this is a personal decision, it is a possibility. Some companies now make it easy to order medical genetic tests through the Web. One of these is: https://www.23andme.com/

1. Describe the inheritance pattern for a single-gene autosomal dominant trait, such as free-hanging earlobes.

2. Give an example of a multiple allele trait and a polygenic trait.

4. Describe a genetic disorder caused by a mutation in a single gene.

5. What causes Down syndrome?

6. What is gene therapy?

8. How might red-green color blindness affect the health of a person with this trait?

9. Compare and contrast dominance and epistasis.

10. Explain why genetic disorders caused by abnormal numbers of chromosomes most often involve the X chromosome.

Technology has been developed to cure some genetic disorders with gene therapy. This involves inserting normal genes into cells with mutations. Scientists use genetic technology for other purposes as well.