Biotechnology: The Invisible Revolution can be seen at http://www.youtube.com/watch?v=OcG9q9cPqm4.

Biotechnology uses a variety of techniques to achieve its aims. Two commonly used techniques are gene cloning and the polymerase chain reaction.

Gene cloning is the process of isolating and making copies of a gene. This is useful for many purposes. For example, gene cloning might be used to isolate and make copies of a normal gene for gene therapy. Gene cloning involves four steps: isolation, ligation, transformation, and selection. You can watch an interactive animation about gene cloning at this link:

The polymerase chain reaction (PCR) makes many copies of a gene or other DNA segment. This might be done in order to make large quantities of a gene for genetic testing. PCR involves three steps: denaturing, annealing, and extension. The three steps are illustrated in Figure below. They are repeated many times in a cycle to make large quantities of the gene. You can watch animations of PCR at these links:

The Polymerase Chain Reaction. The polymerase chain reaction involves three steps. High temperatures are needed for the process to work. The enzyme Taq polymerase is used in step 3 because it can withstand high temperatures.

Methods of biotechnology can be used for many practical purposes. They are used widely in both medicine and agriculture. To see how biotechnology can be used to solve crimes, watch the video Justice DNA—Freeing the Innocent (Note: Rape and murder are mentioned in this video with no graphic details, as well as the fact that semen was analyzed for DNA . View with caution, especially if younger children are present.)

In addition to gene therapy for genetic disorders, biotechnology can be used to transform bacteria so they are able to make human proteins. Figure below shows how this is done. Proteins made by the bacteria are injected into people who cannot produce them because of mutations.

Genetically Engineering Bacteria to Produce a Human Protein. Bacteria can be genetically engineered to produce a human protein, such as a cytokine. A cytokine is a small protein that helps fight infections.

Insulin was the first human protein to be produced in this way. Insulin helps cells take up glucose from the blood. People with type 1 diabetes have a mutation in the gene that normally codes for insulin. Without insulin, their blood glucose rises to harmfully high levels. At present, the only treatment for type 1 diabetes is the injection of insulin from outside sources. Until recently, there was no known way to make insulin outside the human body. The problem was solved by gene cloning. The human insulin gene was cloned and used to transform bacterial cells, which could then produce large quantities of human insulin.

As we have learned, we know that, thanks to our DNA, each of us is a little bit different. Some of those differences are obvious, like eye and hair color, but others are not so obvious, like how our bodies react to medication. Researchers are beginning to look at how to tailor medical treatments to our genetic profiles, in a relatively new field called Pharmacogenomics. Some of the biggest breakthroughs have been in cancer treatment.

Imagine living cells acting as memory devices; biofuels brewing from yeast, or a light receptor taken from algae that makes photographs on a plate of bacteria. The field of Synthetic Biology is making biology easier to engineer so that new functions can be derived from living systems. 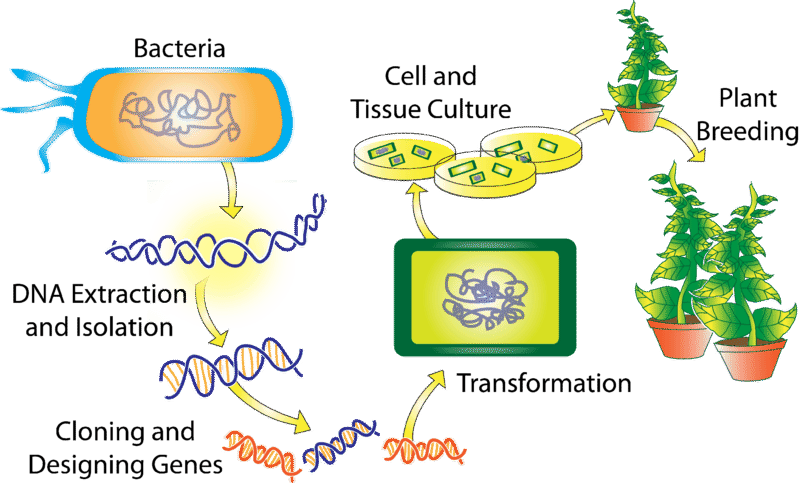 Creating a Transgenic Crop. A transgenic crop is genetically modified to be more useful to humans.

Genetically Modified Foods / Bill Nye: (NOTE: There is some controversy about Bill Nye, as he is very much against creation, but this is a decent video that explains GMO’s. If you don’t want to watch a video with him in it, you can watch the other GMO video farther down the page).

Transgenic crops have been created with a variety of different traits, such as yielding more food, tasting better, surviving drought, and resisting insect pests. Scientists have even created a transgenic purple tomato that contains a cancer-fighting compound (see Figure below). To learn how scientists have used biotechnology to create plants that can grow in salty soil, watch the video Salt of the Earth—Engineering Salt-Tolerant Plants:

How Are GMO’s Created? This is a pretty good video that is easy to understand.

Transgenic Purple Tomato. A purple tomato is genetically modified to contain a cancer-fighting compound. A gene for the compound was transferred into normal red tomatoes.

The use of biotechnology has raised a number of ethical, legal, and social issues. Here are just a few:

Addressing such issues is beyond the scope of this book. The following example shows how complex the issues may be:

A strain of corn has been created with a gene that encodes a natural pesticide. On the positive side, the transgenic corn is not eaten by insects, so there is more corn for people to eat. The corn also doesn’t need to be sprayed with chemical pesticides, which can harm people and other living things. On the negative side, the transgenic corn has been shown to cross-pollinate nearby milkweed plants. Offspring of the cross-pollinated milkweed plants are now known to be toxic to monarch butterfly caterpillars that depend on them for food. Scientists are concerned that this may threaten the monarch species as well as other species that normally eat monarchs.

As this example shows, the pros of biotechnology may be obvious, but the cons may not be known until it is too late. Unforeseen harm may be done to people, other species, and entire ecosystems. No doubt the ethical, legal, and social issues raised by biotechnology will be debated for decades to come. For a recent debate about the ethics of applying biotechnology to humans, watch the video at the link below. In the video, a Harvard University professor of government and a Princeton University professor of bioethics debate the science of “perfecting humans.”http://www.youtube.com/watch?v=-BPna-fSNOE (OPTIONAL – This video is reaaaaaaaaaaly long, but may be interesting to some of you.)

SciShow: Why are GMOs Bad?

Read this article about cloning: “Cloning, Right or Wrong?”

2. What is recombinant DNA?

3. Identify the steps of gene cloning.

4. What is the purpose of the polymerase chain reaction?

5. Make a flow chart outlining the steps involved in creating a transgenic crop.

6. Explain how bacteria can be genetically engineered to produce a human protein.

7. Identify an ethical, legal, or social issue raised by biotechnology. State your view on the issue, and develop a logical argument to support your view.

In this lesson, you read that bacteria can be transformed with human genes so they are able to make human proteins. This is possible because the genetic code is universal. Genetic information is encoded and read in the same way in all known species.