Your DNA, or deoxyribonucleic acid, contains the genes that determine who you are. How can this organic molecule control your characteristics? DNA contains instructions for all the proteins your body makes. Proteins, in turn, determine the structure and function of all your cells. What determines a protein’s structure? It begins with the sequence of amino acids that make up the protein. Instructions for making proteins with the correct sequence of amino acids are encoded in DNA.

DNA: The book of you

What is DNA and How Does it Work?

Discovering this sequence of events was a major milestone in molecular biology. It is called the central dogma of molecular biology. You can watch a video about the central dogma and other concepts in this lesson at this link: http://www.youtube.com/watch?v=ZjRCmU0_dhY&feature=fvw (8:07). BONUS: It’s in Japanese, LOL…but that’s ok, you can read the subtitles. My daughter lives in Japan, so she will be thrilled you are watching something in the language she is now fluent in!

An overview of protein synthesis can be viewed at http://www.youtube.com/watch?v=-ygpqVr7_xs&feature=related (10:46).

Griffith Searches for the Genetic Material

Many scientists contributed to the identification of DNA as the genetic material. In the 1920s, Frederick Griffith made an important discovery. He was studying two different strains of a bacterium, called R (rough) strain and S (smooth) strain. He injected the two strains into mice. The S strain killed (virulent) the mice, but the R strain did not (nonvirulent) (see Figure below). Griffith also injected mice with S-strain bacteria that had been killed by heat. As expected, the killed bacteria did not harm the mice. However, when the dead S-strain bacteria were mixed with live R-strain bacteria and injected, the mice died.

Griffith’s Experimental Results. Griffith showed that a substance could be transferred to harmless bacteria and make them deadly.

Based on his observations, Griffith deduced that something in the killed S-strain was transferred to the previously harmless R-strain, making the R-strain deadly. What was that something? What type of substance could change the characteristics of the organism that received it?

Hershey and Chase Seal the Deal

The conclusion that DNA is the genetic material was not widely accepted at first. It had to be confirmed by other research. In the 1950s, Alfred Hershey and Martha Chase did experiments with viruses and bacteria. Viruses are not cells. They are basically DNA inside a protein coat. To reproduce, a virus must insert its own genetic material into a cell (such as a bacterium). Then it uses the cell’s machinery to make more viruses. The researchers used different radioactive elements to label the DNA and proteins in viruses. This allowed them to identify which molecule the viruses inserted into bacteria. DNA was the molecule they identified. This confirmed that DNA is the genetic material.

Other important discoveries about DNA were made in the mid-1900s by Erwin Chargaff. He studied DNA from many different species. He was especially interested in the four different nitrogen bases of DNA: adenine (A), guanine (G), cytosine (C), and thymine (T) (see Figure below). Chargaff found that concentrations of the four bases differed from one species to another. However, within each species, the concentration of adenine was always about the same as the concentration of thymine. The same was true of the concentrations of guanine and cytosine. These observations came to be known as Chargaff’s rules. The significance of the rules would not be revealed until the structure of DNA was discovered.

Nitrogen Bases in DNA. The DNA of all species has the same four nitrogen bases.

The Twisting Tale of DNA (optional):

After DNA was found to be the genetic material, scientists wanted to learn more about it. James Watson and Francis Crick are usually given credit for discovering that DNA has a double helix shape, like a spiral staircase (see Figure below). The discovery was based on the prior work of Rosalind Franklin and other scientists, who had used X rays to learn more about DNA’s structure. Franklin and these other scientists have not always been given credit for their contributions. You can learn more about Franklin’s work by watching the video at this link: http://www.youtube.com/watch?v=s3whouvZYG8 (7:47).

The double helix shape of DNA, together with Chargaff’s rules, led to a better understanding of DNA. DNA, as a nucleic acid, is made from nucleotide monomers, and the DNA double helix consists of two polynucleotide chains. Each nucleotide consists of a sugar (deoxyribose), a phosphate group, and a nitrogen-containing base (A, C, G, or T). The sugar-phosphate backbone of the double helix was discussed in the Chemistry of Life chapter.

Scientists concluded that bonds (hydrogen bonds) between complementary bases hold together the two polynucleotide chains of DNA. Adenine always bonds with its complementary base, thymine. Cytosine always bonds with its complementary base, guanine. If you look at the nitrogen bases in Figure above, you will see why. Adenine and guanine have a two-ring structure. Cytosine and thymine have just one ring. If adenine were to bind with guanine and cytosine with thymine, the distance between the two DNA chains would be variable. However, when a one-ring molecule binds with a two-ring molecule, the distance between the two chains is kept constant. This maintains the uniform shape of the DNA double helix. These base pairs (A-T or G-C) stick into the middle of the double helix, forming, in essence, the steps of the spiral staircase.

Click the link below to build a DNA molecule:

Knowledge of DNA’s structure helped scientists understand how DNA replicates. DNA replication is the process in which DNA is copied. It occurs during the synthesis (S) phase of the eukaryotic cell cycle. DNA replication begins when an enzyme breaks the bonds between complementary bases in DNA (see Figure below). This exposes the bases inside the molecule so they can be “read” by another enzyme and used to build two new DNA strands with complementary bases. The two daughter molecules that result each contain one strand from the parent molecule and one new strand that is complementary to it. As a result, the two daughter molecules are both identical to the parent molecule. The process of DNA replication is actually much more complex than this simple summary. 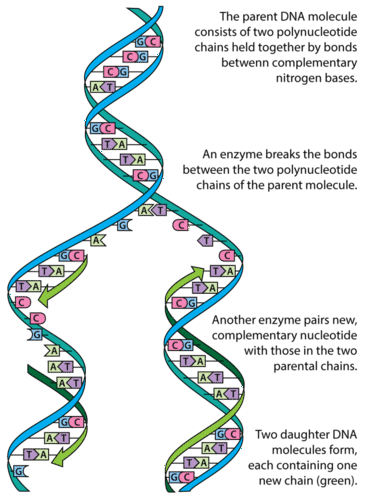 DNA Replication. DNA replication is a semi-conservative process. Half of the parent DNA molecule is conserved in each of the two daughter DNA molecules.

DNA alone cannot “tell” your cells how to make proteins. It needs the help of RNA, the other main player in the central dogma of molecular biology. Remember, DNA “lives” in the nucleus, but proteins are made on the ribosomes in the cytoplasm. How does the genetic information get from the nucleus to the cytoplasm? RNA is the answer.

RNA, like DNA, is a nucleic acid. However, RNA differs from DNA in several ways. In addition to being smaller than DNA, RNA also

Why RNA is Just as Cool and DNA:

This printable will help you remember the material in the video above:

There are three main types of RNA, all of which are involved in making proteins.

In the next lesson, you can read in detail how these three types of RNA help cells make proteins.

2. Outline research that determined that DNA is the genetic material.

3. What are Chargaff’s rules?

4. Identify the structure of the DNA molecule.

5. Why is DNA replication said to be semi-conservative?

6. Create a diagram that shows how DNA replication occurs.

7. Explain why complementary base pairing is necessary to maintain the double helix shape of the DNA molecule.

8. Compare and contrast DNA and RNA.

All three types of RNA are needed by cells to make proteins.