If you look at living matter with a microscope—even a simple light microscope—you will see that it consists of cells. Cells are the basic units of the structure and function of living things. They are the smallest units that can carry out the processes of life. All organisms are made up of one or more cells, and all cells have many of the same structures and carry out the same basic life processes. Knowing the structures of cells and the processes they carry out is necessary to understanding life itself.

The first time the word cell was used to refer to these tiny units of life was in 1665 by a British scientist named Robert Hooke. Hooke was one of the earliest scientists to study living things under a microscope. The microscopes of his day were not very strong, but Hooke was still able to make an important discovery. When he looked at a thin slice of cork under his microscope, he was surprised to see what looked like a honeycomb. Hooke made the drawing in Figure below to show what he saw. As you can see, the cork was made up of many tiny units, which Hooke called cells.

By the early 1800s, scientists had observed the cells of many different organisms. These observations led two German scientists, named Theodor Schwann and Matthias Jakob Schleiden, to propose that cells are the basic building blocks of all living things. Around 1850, a German doctor named Rudolf Virchow was studying cells under a microscope when he happened to see them dividing and forming new cells. He realized that living cells produce new cells through division. Based on this realization, Virchow proposed that living cells arise only from other living cells. The ideas of all three scientists—Schwann, Schleiden, and Virchow—led to the cell theory, which is one of the fundamental theories of biology. The cell theory states that:

KQED: The World’s Most Powerful Microscope

KQED The World’s Most Power Microscope:

Cutting-edge microscopes, called confocal microscopes, at the University of California, San Francisco are helping scientists create three-dimensional images of cells, and may help lead to new medical breakthroughs, including a treatment for Type 1 diabetes. See http://www.kqed.org/quest/television/super-microscope for a description of this work.

Today, we know that all living cells have certain things in common. For example, all cells share functions such as obtaining and using energy, responding to the environment, and reproducing. We also know that different types of cells—even within the same organism—may have their own unique functions as well. Cells with different functions generally have different shapes that suit them for their particular job. Cells vary in size as well as shape, but all cells are very small. In fact, most cells are much smaller than the period at the end of this sentence. If cells have such an important role in living organisms, why are they so small? Even the largest organisms have microscopic cells. What limits cell size?

The answer to these questions is clear once you know how a cell functions. To carry out life processes, a cell must be able to quickly pass substances into and out of the cell. For example, it must be able to pass nutrients and oxygen into the cell and waste products out of the cell. Anything that enters or leaves a cell must cross its outer surface. It is this need to pass substances across the surface that limits how large a cell can be. Look at the two cubes in Figure below. As this figure shows, a larger cube has less surface area relative to its volume than a smaller cube. This relationship also applies to cells; a larger cell has less surface area relative to its volume than a smaller cell. A cell with a larger volume also needs more nutrients and oxygen and produces more wastes. Because all of these substances must pass through the surface of the cell, a cell with a large volume will not have enough surface area to allow it to meet its needs. The larger the cell is, the smaller its ratio of surface area to volume, and the harder it will be for the cell to get rid of its wastes and take in necessary substances. This is what limits the size of the cell.

Why are Cells Small?

Cells with different functions often have different shapes. The cells pictured inFigure below are just a few examples of the many different shapes that cells may have. Each type of cell in the figure has a shape that helps it do its job. For example, the job of the nerve cell is to carry messages to other cells. The nerve cell has many long extensions that reach out in all directions, allowing it to pass messages to many other cells at once. Do you see the tail-like projections on the algae cells? Algae live in water, and their tails help them swim. Pollen grains have spikes that help them stick to insects such as bees. How do you think the spikes help the pollen grains do their job? (Hint: Insects pollinate flowers.)

As these pictures show, cells come in many different shapes. Clockwise from the upper left photo are a nerve cell, red blood cells, bacteria, pollen grains, and algae. How are the shapes of these cells related to their functions? 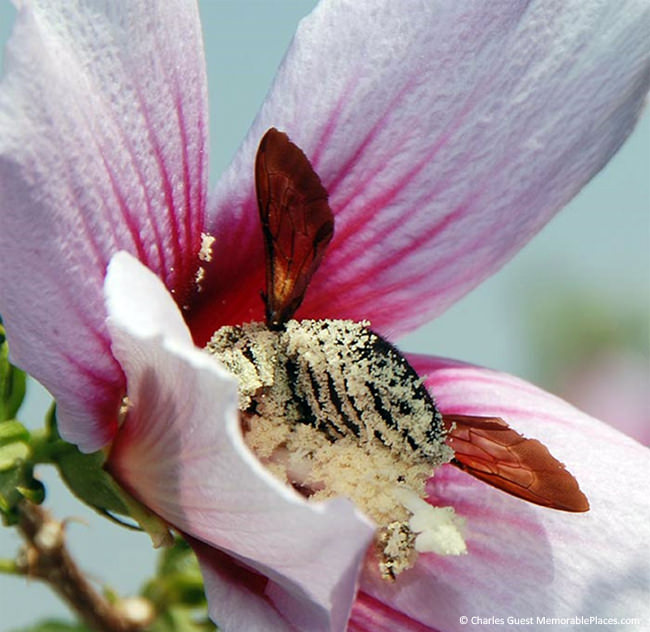 Notice the pollen grains sticking to the bee’s body. The grains are able to stick due to the spikes they are covered with. How could pollen evolve spikes? If they didn’t have spikes on them in the first place, they wouldn’t stick to insects. If they didn’t stick to insects, they wouldn’t be able to travel to other flowers for the purposes of pollination. Plants that are currently pollinated by insects would never have become pollinated which means they wouldn’t have survived. God created pollen cells to have spikes just for this purpose. (Photo by Charles Guest of Memorable Places Photography)

Parts of a Cell

Although cells are diverse, all cells have certain parts in common. The parts include a plasma membrane, cytoplasm, ribosomes, and DNA.

These parts are common to all cells, from organisms as different as bacteria and human beings. How did all known organisms come to have such similar cells? The similarities show that God used a similar blueprint when creating life.

A nice introduction to the cell is available at http://www.youtube.com/watch?v=Hmwvj9X4GNY (21:03). This video is OPTIONAL.

There is another basic cell structure that is present in many but not all living cells: the nucleus. The nucleus of a cell is a structure in the cytoplasm that is surrounded by a membrane (the nuclear membrane) and contains DNA. Based on whether they have a nucleus, there are two basic types of cells: prokaryotic cells and eukaryotic cells. You can watch animations of both types of cells at the link below. http://www.learnerstv.com/animation/animation.php?ani=162&cat=biology

Bacteria are described in the following video http://www.youtube.com/watch?v=TDoGrbpJJ14 (18:26).  This video is OPTIONAL.

Viruses, like the one depicted in Figure below, are tiny particles that may cause disease. Human diseases caused by viruses include the common cold and flu. Do you think viruses are prokaryotes or eukaryotes? The answer may surprise you. Viruses are not cells at all, so they are neither prokaryotes nor eukaryotes.

Viruses contain DNA but not much else. They lack the other parts shared by all cells, including a plasma membrane, cytoplasm, and ribosomes. Therefore, viruses are not cells, but are they alive? All living things not only have cells; they are also capable of reproduction. Viruses cannot reproduce by themselves. Instead, they infect living hosts, and use the hosts’ cells to make copies of their own DNA. For these reasons, most scientists do not consider viruses to be living things.

An overview of viruses can be seen at http://www.youtube.com/watch?v=0h5Jd7sgQWY (23:17).  This video is OPTIONAL.

1. What did Hooke and Leeuwenhoek discover about cells by using a microscope?

3. List the four parts that are found in all living cells.

4. One of the cells pictured below is a human brain cell. The other cell is found in human blood. Which cell came from the brain? Explain your answer.

5. Why are all cells very small? Explain what limits the size of cells.

7. Explain why viruses are not considered to be living.

Cells have many different structures that carry out the processes of life.