You have just read how photosynthesis stores energy in glucose. How do living things make use of this stored energy? The answer is cellular respiration. This process releases the energy in glucose to make ATP, the molecule that powers all the work of cells.

Are you ready for another tough chapter?? Here we go!! 🙂

This printable is not a requirement, but if you want some extra practice to understand the above video’s content, it will help:

Cellular respiration involves many chemical reactions. As you saw earlier, the reactions can be summed up in this equation:

The reactions of cellular respiration can be grouped into three stages: glycolysis, the Krebs cycle (also called the citric acid cycle), and electron transport. Figure below gives an overview of these three stages, which are also described below.

Cellular respiration takes place in the stages shown here. The process begins with a molecule of glucose, which has six carbon atoms. What happens to each of these atoms of carbon? Hey, if I heard you say, “Who cares….”, lol….well just hang in there and keep reading!

The first stage of cellular respiration is glycolysis. It takes place in the cytosol of the cytoplasm.

The word glycolysis means “glucose splitting,” which is exactly what happens in this stage. Enzymes split a molecule of glucose into two molecules of pyruvate (also known as pyruvic acid). This occurs in several steps, as shown in Figure below. 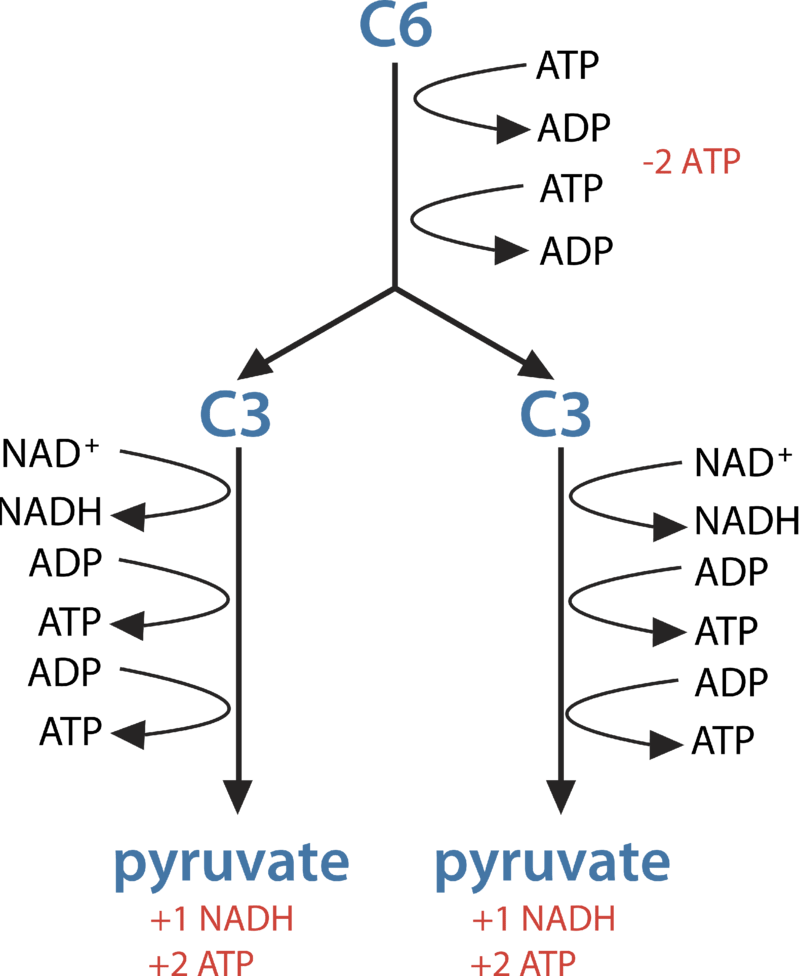 You can watch an animation of the steps of glycolysis at the following link:http://www.youtube.com/watch?v=6JGXayUyNVw.

In glycolysis, glucose (C6) is split into two 3-carbon (C3) pyruvate molecules. This releases energy, which is transferred to ATP. How many ATP molecules are made during this stage of cellular respiration?

Blah blah blah….oops…sorry, that wasn’t meant to be a public statement. 😉

A summary of glycolysis can be viewed at http://www.youtube.com/watch?v=FE2jfTXAJHg.  This video is OPTIONAL. You may thank me now. 😉

Watching that video just gave me a cramp…in my brain. *cough*

Structure of the Mitochondrion: Key to Aerobic Respiration

Recall that glycolysis produces two molecules of pyruvate (pyruvic acid). These molecules enter the matrix of a mitochondrion, where they start the Krebs cycle. The reactions that occur next are shown in Figure below. 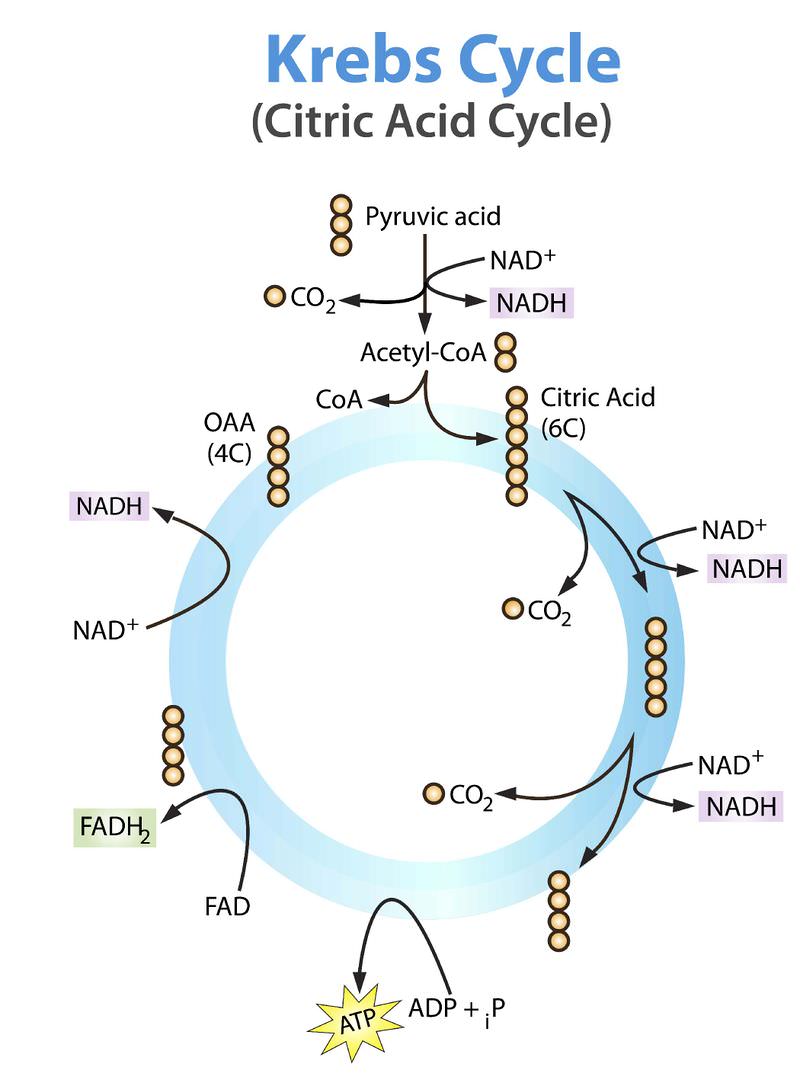 You can watch an animated version at this link: http://www.youtube.com/watch?v=p-k0biO1DT8.

Wooooooooooo Krebs!!! Krebs!! Krebs!!! *ahem*…sorry – back to reading calmly now. I just had to wake myself up for a minute.

The Krebs cycle starts with pyruvic acid from glycolysis. Each small circle in the diagram represents one carbon atom. For example, citric acid is a six carbon molecule, and OAA (oxaloacetate) is a four carbon molecule. Follow what happens to the carbon atoms as the cycle proceeds. In one turn through the cycle, how many molecules are produced of ATP? How many molecules of NADH and FADH2 are produced?

Before the Krebs cycle begins, pyruvic acid, which has three carbon atoms, is split apart and combined with an enzyme known as CoA, which stands for coenzyme A. The product of this reaction is a two-carbon molecule called acetyl-CoA. The third carbon from pyruvic acid combines with oxygen to form carbon dioxide, which is released as a waste product. High-energy electrons are also released and captured in NADH.

Steps of the Krebs Cycle

The Krebs cycle itself actually begins when acetyl-CoA combines with a four-carbon molecule called OAA (oxaloacetate) (see Figure above). This produces citric acid, which has six carbon atoms. This is why the Krebs cycle is also called the citric acid cycle. After citric acid forms, it goes through a series of reactions that release energy. The energy is captured in molecules of NADH, ATP, and FADH2, another energy-carrying compound. Carbon dioxide is also released as a waste product of these reactions. The final step of the Krebs cycle regenerates OAA, the molecule that began the Krebs cycle. This molecule is needed for the next turn through the cycle. Two turns are needed because glycolysis produces two pyruvic acid molecules when it splits glucose. Watch the OSU band present the Krebs cycle: http://www.youtube.com/watch?v=FgXnH087JIk.

Results of the Krebs Cycle

After the second turn through the Krebs cycle, the original glucose molecule has been broken down completely. All six of its carbon atoms have combined with oxygen to form carbon dioxide. The energy from its chemical bonds has been stored in a total of 16 energy-carrier molecules. These molecules are:

The Krebs cycle is reviewed at http://www.youtube.com/watch?v=juM2ROSLWfw.  This video is OPTIONAL.

Electron transport is the final stage of aerobic respiration. In this stage, energy from NADH and FADH2, which result from the Krebs cycle, is transferred to ATP. Can you predict how this happens? (Hint: How does electron transport occur in photosynthesis?)

See http://www.youtube.com/watch?v=1engJR_XWVU for an overview of the electron transport chain.

High-energy electrons are released from NADH and FADH2, and they move along electron transport chains, like those used in photosynthesis. The electron transport chains are on the inner membrane of the mitochondrion. As the high-energy electrons are transported along the chains, some of their energy is captured. This energy is used to pump hydrogen ions (from NADH and FADH2) across the inner membrane, from the matrix into the intermembrane space. Electron transport in a mitochondrion is shown in Figure below.

The pumping of hydrogen ions across the inner membrane creates a greater concentration of the ions in the intermembrane space than in the matrix. This chemiosmotic gradient causes the ions to flow back across the membrane into the matrix, where their concentration is lower. ATP synthase acts as a channel protein, helping the hydrogen ions cross the membrane. It also acts as an enzyme, forming ATP from ADP and inorganic phosphate. After passing through the electron-transport chain, the “spent” electrons combine with oxygen to form water. This is why oxygen is needed; in the absence of oxygen, this process cannot occur. You can see how all these events occur at the following link: http://www.sp.uconn.edu/~terry/images/anim/ATPmito.html.

Here’s another video – a bit more fun than the videos above. Sorry, you don’t get to skip it. This guy worked really hard to make it. Give him a thumbs up! 😉

You have seen how the three stages of aerobic respiration use the energy in glucose to make ATP. How much ATP is produced in all three stages? Glycolysis produces 2 ATP molecules, and the Krebs cycle produces 2 more. Electron transport begins with several molecules of NADH and FADH2 from the Krebs cycle and transfers their energy into as many as 34 more ATP molecules. All told, then, up to 38 molecules of ATP can be produced from just one molecule of glucose in the process of aerobic respiration.

Now, if you understood all of the above and can recite it all to me, you are smarter than I am. Wooo! I’ll just jump my little ol’ self to an easy animal chapter or something. 😉

1. List the stages of aerobic respiration in the order in which they occur.

2. Describe what happens during glycolysis. How many ATP molecules are gained during this stage?

4. What role do mitochondria play in cellular respiration?

5. What are the products of the Krebs cycle?

6. What is the maximum number of ATP molecules that can be produced during the electron transport stage of aerobic respiration?

7. When you exhale onto a cold window pane, water vapor in your breath condenses on the glass. Where does the water vapor come from?

8. Assume that a new species of organism has been discovered. Scientists have observed its cells under a microscope and determined that they lack mitochondria. What type of cellular respiration would you predict that the new species uses? Explain your prediction.

9. Explain why two turns of the Krebs cycle are needed for each molecule of glucose.

The last two stages of aerobic respiration require oxygen. However, not all organisms live in places where there is a plentiful supply of oxygen.