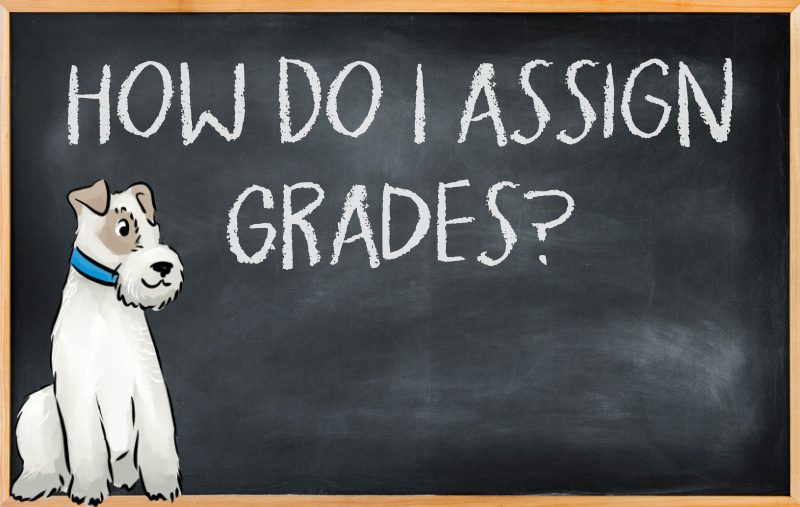 I’ve received a lot of questions about assigning grades, so I’m writing this blog post to share some suggestions. Ultimately, how you assign grades is up to you 😉, but here is how *I* did it.

My philosophy about grades

I never made grades the focus of our homeschool. Learning in our house wasn’t about trying to make a certain score or grade, it was about mastering material. It was safe to not understand something. Mistakes were O.K. It was fine to take more time to learn something if necessary.

I don’t think my children felt pressured to get a certain grade, but sometimes they liked to. As they got older, they also had to learn what grades were all about, in order to be prepared for college. We still never made it a source of stress or a goal to obtain. The goal was to LEARN. If that meant the first time you tried something you only got half of the answers right at first, that was OK (unless it was as a result of laziness, lol). Wrong answers were not usually left unaddressed. We went over the material until they understood why they got something wrong, and in some cases they had the opportunity to correct those mistakes (when it was appropriate).

When my kids were younger, I didn’t usually give them grades except on math papers and a few other items. Often the “grade” was just the wrong answers marked or circled and a number of wrong items tallied at the top like this:

Sometimes I’d give them the percentage in addition to how many problems they missed. In this example, the “score” is 83% (10 problems correct out of 12 total problems = 10/12 = .83 x 100). Math reminder for those of you who are math adverse, lol: The word percent comes from the Latin “per centum” which means per hundred.

In the above example, I’d have my child correct the wrong answers. If there was any confusion about why the wrong answer was reached, we’d discuss it together (often via my handy whiteboard). If there were a TON of wrong answers, that was a clue to me that my child wasn’t understanding the material and we’d backtrack and either spend more time on the concepts or cover them in a different way.

When I made up a report card for my kids (they thought report cards were fun), I’d assign them grades based on effort, not necessarily the percentages they achieved on their work.

In high school, while the focus was still not on earning grades (or studying for tests – which will be a topic for another post), I did assign grades for some subjects to get them used to it (and as a motivator for one of my children). I also needed to assign grades because we were enrolled in a charter school. We had the ability to homeschool the way we wanted to and using whatever curriculum we chose (including the things I created for my children), but had the funds from the state to purchase materials as well as a bit of accountability.

Side note:
I understand how some families don’t want any government oversight for their homeschool, but at the time, our charter school was very hands-off, and we used it for the funds during a time when every penny counted. We still used Christian materials if and when we wanted to, but we had to purchase those ourselves. Over time the school became more restrictive and a pain to deal with, but by that time, we only had a year left with our youngest. We didn’t enroll in the school during that last year of homeschooling for various reasons, and I was glad to be done with them. They were a real help though when we were enrolled and allowed us to buy a lot of cool stuff for the kids to use in our homeschool.

Here’s an example on how I assigned grades for biology (which you can use as a template for almost any subject).

I used a homeschool planner

I used Homeschool Tracker (there’s still a free, old version by the way). I just told it how I want it to weight subject activities, and it calculated everything out for me. There are lots of other homeschool grading programs that do the same thing, or you can do it the old-fashioned way by hand! Here are a few homeschool planners that can help you with grading, keeping records, and planning:

I’ve only used Homeschool Tracker (as well as old-fashioned pen and paper), but there are lots of other options out there!

I used the following grading scale

The above screenshot is from Homeschool Tracker showing how I assigned grading weights for biology.

This screenshot was taken after just the first week of biology, but it shows you how one of my kids earned his biology grade. Some things he did were totally ungraded and not reflected in the grade averages above.

The picture to the left shows how Homeschool Tracker calculated my son’s grade. In this example there were 47 questions for him to answer in his workbook. He got 44 questions correct. His grade was 94%, an A.

Here’s a few online points calculators you can use if you aren’t using a homeschool planner:

A breakdown of how I calculated grades

All the percentages above add up to 100%.

At the end of the year

At the end of the year, Homeschool Tracker would figure out what grade was earned in each subject, and I could use that information for the transcripts I created for college and future job applications.

Grading doesn’t have to be complicated. Using a homeschool planner makes it even easier, but you can use a simple and free online calculator to figure things out, instead. You can use weighted categories like I did (classwork and participation, labs, etc.) or mix-and-match your own categories to fit your particular situation {make sure to look up local requirements and college requirements when making a decision on how you want to grade your student’s work)!

Do you ideas for grading, or a homeschool planner you’d like to recommend? What’s the system you use for grading? Leave a comment below!